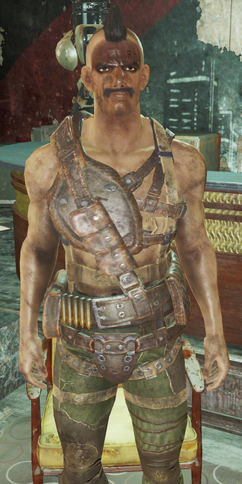 Captain Wes is the leader of the Gunners in the Commonwealth in 2287.

Captain Wes is the commanding officer of the Gunners, operating the organization from their headquarters in Gunners plaza.

Impressed by Clint after he betrayed the Commonwealth Minutemen during the Gunners' hostile takeover of Quincy, Wes appointed Clint as commander of the Gunner group in Quincy and also supported him with two of his favorite subordinates, Tessa and Baker.

Wes appears only in Fallout 4.

Retrieved from "https://fallout.fandom.com/wiki/Wes?oldid=3290426"
Community content is available under CC-BY-SA unless otherwise noted.