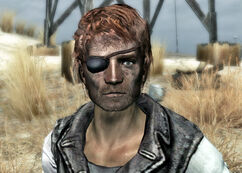 Into The Pitt
Free Labor

“If you aren't getting your hands dirty, you aren't making a difference. Welcome to the world.”

Wernher is an escaped slave and former right-hand man of Ishmael Ashur from The Pitt in 2277.

Once one of the smarter Pitt raiders, Wernher was condemned to slavery after trying to stage a coup to overthrow Ashur. He used his knowledge of electronics to deactivate his collar and escape. He harbors a grudge against the city and against Ashur in particular. He has no particular love for the slaves, and he sees a plan to kidnap Ashur's child as a way to get back at The Pitt's ruler and the city in general.[1]

He broadcasts a radio distress call to recruit help.

If the Free Labor quest is completed by siding with the slaves, Wernher generally wanders Downtown and can be seen making conversation with the locals. However, he can also wander outside the city limits and seems to get stuck around the Bridge and train yard.

Wernher appears only in the Fallout 3 add-on The Pitt. 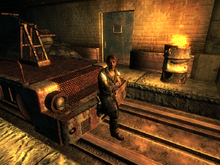 Wernher in the train tunnel
Add an image to this gallery
Retrieved from "https://fallout.fandom.com/wiki/Wernher?oldid=3204399"
Community content is available under CC-BY-SA unless otherwise noted.