Creature · Cryptid
“Few creatures, real or imagined, terrify West Virginians quite like the Wendigo. Possessing alarming speed, razor-sharp claws and an insatiable hunger for raw flesh, it is truly the stuff of nightmares.”— Fallout 76 loading screen

Wendigos are creatures found in Appalachia.

Wendigos are mutated humanoids encountered in post-apocalyptic Appalachia.[1] Individuals such as Morris Stevens have transformed into the creatures, connected through their participation in the act of cannibalism.[2] Pre-War urban legends surrounding the wendigo cave within the Savage Divide became reality when the Progenitor Wendigo made its home there.[3]

Wendigos are gaunt, emaciated humanoids with ashy gray skin, long bony arms, and a large, distended abdomen. Their arms and legs are long and slender, and though they typically hunch close to the ground, they are capable of standing. Their skull-like face has short strands of long, stringy hair, sunken, blackened eye sockets, and a mouth filled with long, jagged teeth. Their hands are large, with fingers tipped by sharp claws. They have a similar radiation resistance to that of feral ghouls and are sometimes found among small groups of them. Acid can be harvested from their teeth.

Wendigos are carnivorous and often hunt prey, and make no discern between human or animal.[1] They emit audible raspy exhalations when alerted, and they have the ability to let out a signature piercing scream to intimidate and stagger their prey.

Wendigos are aggressive and can quickly deal a high amount of damage. Their melee strikes are powerful enough to stagger those in power armor. Wendigos will not run away if the player character climbs onto objects or furniture but will continue to screech. During combat, wendigos may let loose a piercing shriek that may attract a horde of feral ghouls to their location.

Though rare, one can occasionally witness wendigos perched atop tall and out-of-sight locations, which allows them to ambush prey. One such example can be seen with wendigos that perch on trees overlooking the central roads of the Mire. At higher levels, wendigos will frequently appear as a boss-type enemy for groups of ghouls. They reliably drop up to eight loose screws, with a rare chance of dropping up to 11 screws. Feral ghouls and wendigos are friendly to each other.

The base variant of the creature, with most of the attributes described above.

A more powerful wendigo variant with a reddish, fleshy appearance. Its darker, muddled colors can easily make the creature blend into dimmer or more urbanized environments.

One of the strongest variants, it bears a charred appearance and has a soft green glow. This variant also has a chance to spawn in a wendigo horde made up of two or three wendigos.

A charred, fleshy wendigo with dark red eyes infected with the Scorched Plague. All regular wendigo variants have a corresponding Scorched variant with the same stats, abilities, and items. They may become Scorched when attacked by scorchbeasts or the scorchbeast queen, becoming allies with other Scorched creatures.

The strongest variant, it is identical to the glowing wendigo. They appear almost exclusively alongside wendigo colossi, and are called to support them in battle. Three of them can be found inside Monongah Mine by themselves during the event A Colossal Problem.

A wendigo can appear in the following locations:

There is a miscellaneous quest to kill a Wendigo while wearing a clown costume. Completion of the quest requires wearing both the clown outfit and clown hat. Although the quest marker suggests going to the wendigo cave, killing any wendigo counts for the challenge.

In Algonquin folklore, a wendigo is a malevolent spirit that is frequently associated with winter, cold, famine, and starvation. The wendigo is an integral part of many First Nations belief systems. 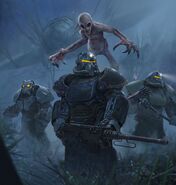 Wendigos with a destroyed caravan

Morris Stevens, a former raider and the first wendigo

Camp Counselor Nia as a wendigo

Scott Conroy as a wendigo

Two glowing wendigos on a road 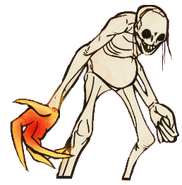 A wendigo, as shown on the Exploding Palm 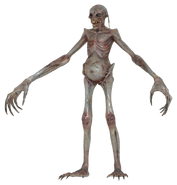 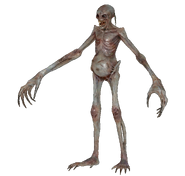 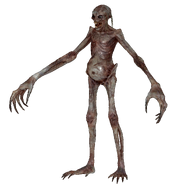 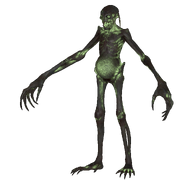 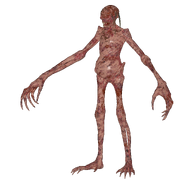 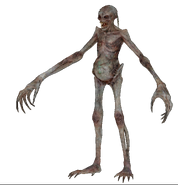 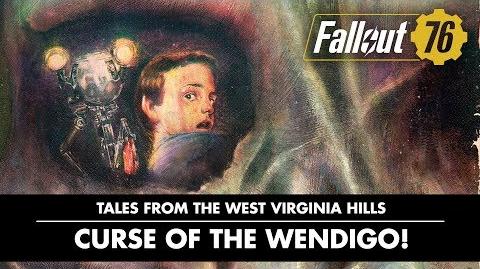