Welcome to the Big Empty 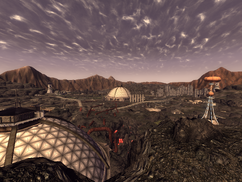 “BE WARNED, INTRUDER! YOU ARE IN THE PRESENCE OF THE MIGHTY THINK TANK OF BIG MT, THE COLLECTIVE GENIUSES OF... WE...”— Doctor Klein, when first meeting the Courier

Welcome to the Big Empty is the first main quest in the Fallout: New Vegas add-on Old World Blues.

After being teleported to Big MT, the Courier will be standing on the balcony of The Sink, facing outwards towards the expanse of the Big Empty. Enter the nearest door into the Sink. Proceed to the elevators. Enter the right elevator to go to The Think Tank. Note that this is the only elevator that can be used at the moment. Due to an overwhelming feeling of pacifism, the Courier won't be able to draw a weapon in the Think Tank. This is so they will not be able to harm the doctors, which is a failsafe put in place after an attack on the Think Tank by Elijah, which led to Dr. 8's voice module being damaged, and the destruction of the Big Empty's multiple train tunnels. When the Courier approaches the doctors, they will address the Courier, and the Courier will learn about Big MT, the various changes they have made to their body, and about Doctor Mobius.

After agreeing to help the Doctors against Mobius, they will assign the Courier to the Sink Central Intelligence Unit.

The balcony, starting point in the Big MT.

The Think Tank, with balcony at the top.
Add a photo to this gallery
Retrieved from "https://fallout.fandom.com/wiki/Welcome_to_the_Big_Empty?oldid=3291198"
Community content is available under CC-BY-SA unless otherwise noted.
... more about "Welcome to the Big Empty"
RDF feed
Has platform
Playstation 3 +, Xbox 360 +  and PC +