1d
“I've discovered a map leading to Vault 242, where the “Dwellers” were all creatures rather than humans. I should follow the map and unlock the secrets this Vault has to offer.”

Welcome to Paradise is a single-stage quest in Fallout Shelter. This quest will be unlocked after finding a Quest clue. After the dwellers return to the Vault, the quest will be available in the overseer's office.

For the first objective, there is an alpha deathclaw accompanied by five other deathclaws, which have lower health than the other deathclaw groups. Once they are defeated, the alpha deathclaw'ss corpse will yield 10 stimpaks, and the room they are in yields four bottles of Nuka-Cola Quantum, a fire hydrant bat, and a Mr. Handy box. For the second objective, there will be a large room at the bottom of the vault that contains T-60f power armor and a pet carrier. 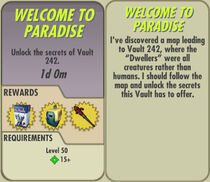