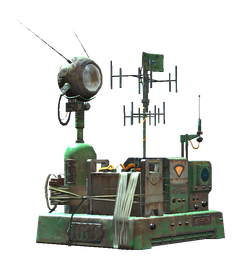 Weathervane is a Railroad radiant quest in Fallout 4. It belongs to a chain of semi-random quests provided by Tinker Tom in the Railroad HQ. He thinks the Institute is trying to "terraform" the Commonwealth by poisoning the atmosphere, so he designed atmospheric sensors called MILA to detect any anomalies in the air. He asks the Sole Survivor to help place these devices on high vantage points throughout the city. The number of locations is fixed, but the order in which they are given is random.

This location is defended by a group of raiders and two turrets outside, one on the flatbed truck and the other on the entrance roof. There is another turret inside on the ground floor. Enter the building to gain access to the rooftop via stairs all the way to the top, where the MILA drop-off location is. Once the MILA has been planted, return to Tinker Tom for a reward and a new assignment.

The entrance is through one small door on the side of the building. Take the elevator at the back of the first room one enters. After exiting the elevator, take the door directly to the right. There is a protectron in this room. Take this to the roof of the Boston Bugle where one will find the area to place the MILA and return to Tinker Tom for a reward and a new assignment.

To reach the MILA point, first go inside Haymarket Mall and fight through both raiders and a few turrets. Keep on climbing up to reach the roof. Beware, once one exits into the roof, a deathclaw will be waiting. Once the deathclaw is killed, look around the building for a monorail train hanging underneath the highway. In order to enter the train, simply follow the catwalk down. Carefully walk across the monorail train until one reaches the end (sometimes, a hostile protectron will spawn.) Once the end of the monorail has been reached, one should see the MILA point. Once the MILA has been placed, return to Tinker Tom for a reward and a new assignment.

Alternatively, the Sole Survivor can directly access the monorail roof via the elevated roadway by climbing through the ruined building, taking to the southwest of Faneuil Hall, or taking the right-hand elevator from the ruined garage opposite Faneuil Hall which avoids having to fight through the raiders or the deathclaw. There is a gap in the road above the terrace building roof, from which one can drop directly onto the monorail.

The site is partially walled off and infested by super mutants. Head inside and use the staircase to climb the building while fighting off the enemies. At the top of the structure there is a small shack walled area with a red loot chest and a random leveled super mutant in it. Kill him and place the MILA on the vantage point, on the side opposite of the red trunk and on the wood plank extrusion. Return to Tinker Tom for a reward and a new location.

This location is defended by a group of raiders, some of which can be found on rooftops. Directly across from the "Now Leasing" sign on the target building (at which the quest marker is probably pointing) is a ramp toward a Blast Radius banner. Follow that path around to the third building in the complex. On its roof is a button that summons a gondola that leads to the top of the original building and the position of the MILA installation point. Once MILA has been placed, return to Tinker Tom for a reward and a new assignment.

The front of the bank is defended by a small group of raiders and a single turret. Once these are taken care of, the vantage point is accessed by using the elevator by the entrance. Exit the elevator and enter another elevator to the roof of the bank, where one can place the MILA. Once this is done, return to Tinker Tom for a reward and a new assignment. Or alternatively, one can directly access the fourth floor via the a door and walkway on the west side linked to the elevated roadway, by climbing through the ruined building to the southwest of Faneuil Hall. This avoids the locked door, raiders and turret.

The plant is heavily guarded inside and out by raiders. Head around the back and climb up the structure next to the plant while fighting off raiders. Walk along the sky bridge and onto the plant. Continue fighting off raiders while going up and along the catwalks and at the far end of the catwalk next to the large sphere will be the MILA vantage point, next to which is the repair bobblehead. Return to Tinker Tom for a reward and a new location.

The plant is defended by a group of feral ghouls and possibly a pack of super mutants in the building to the east. There is an external staircase on the southern corner of the plant for easy access to the rooftop where the MILA can be placed at the northernmost point of the roof. Once the MILA has been placed return to Tinker Tom for a reward and a new assignment.

This location is defended by super mutants. To gain access to the rooftop where the MILA drop-off is, take the lift that is located on the Fallen Skybridge, which can be accessed via a staircase south of Goodneighbor (just north of the primary building). Once inside Hub 360, enter the lift and travel up to the rooftop, place the MILA and then return to Tinker Tom for a reward and a new assignment.

The medical center is defended by Gunners and a single assaultron on the first two floors. On the seventh floor there is an almost complete set of T-45 power armor which can be utilized by a Gunner Commander, but he can be dispatched before he enters the armor so act accordingly. There may be other gunners on this floor as well.

Enter the medical center and travel up three floors to an elevator that leads to the seventh floor. From there travel up three more floors to the tenth to find another elevator and gain access to the rooftop where the MILA drop-off location is. Once the MILA has been placed return to Tinker Tom for a reward and a new assignment.

The location is on the top of the building, there are raiders and super mutants battling on top of the apartments. Enter the apartments, climb the stairs and enter the door that leads out to the rooftop. Place the MILA on the vantage point and return to Tinker Tom for a reward and a new location.

Alternatively the location that one arrives at upon fast traveling, there is a set of stairs behind where they spawn. Go up those stairs, which will take the player character to a lower roof. Get on the railing then jump onto the sign, from there one can jump onto the fire escape and climb up these stairs. Once at the top one can jump and reach the board where the MILA needs to be placed.

Retrieved from "https://fallout.fandom.com/wiki/Weathervane_(quest)?oldid=3450506"
Community content is available under CC-BY-SA unless otherwise noted.
... more about "Weathervane (quest)"
RDF feed
Has platform
PC +, Playstation 4 +  and Xbox One +