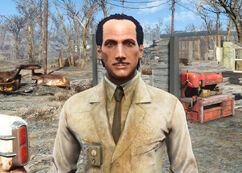 “You have some sort of medical problem here? Or are you just yanking my chain.”

Doc Weathers is a caravan merchant wandering in the Commonwealth in 2287.

Doc Weathers is a traveling doctor and caravaneer operating out of Bunker Hill. His only intentions appear to be monetary gain and assisting the general community, but a further approach into his history reveals a secret connection with the Institute, one of the most feared major organizations in the Commonwealth.[1]

Weathers is accompanied by his loyal pack brahmin, Idiot. He employs two caravan guards for protection. His route passes through local settlements in the northeastern region of the Commonwealth, including County crossing and the Slog.

The Weathers caravan moves through the northeast part of the map according to an apparently random route that varies each trip. Each trip may stop at, or simply pass any or all of the northeastern settlements: County Crossing, Finch Farm, and the Slog. These settlements may be visited in any order and approached from a variety of directions. If trade caravan posts are built at player controlled settlements in the area, these may also be visited. A final possible halt is an unmarked campsite (with a cooking station and a full bed) to the west of the Museum of Witchcraft. At each of the four halt locations, he will stop for six game hours normally.

In addition to these possible halts, the caravan may pass close to other locations (without stopping), including Saugus Ironworks, Hub City Auto Wreckers, Lynn Pier Parking, and Longneck Lukowski's Cannery. Hostile interactions are likely in many of these locations, and at random encounter points, if the player character is present. If he is encountered as he leaves Bunker Hill, he will first transit northeast to County Crossing, where his normal circuit begins.

If the player character fast travels back from another cell to the location where Weathers is currently halted (including Bunker Hill as well as his circuit stops) or sleeps in or near one of these locations, his departure will be delayed until shortly after they arrive, or wake up.

As with other Bunker Hill traveling merchants, his appearances there are entirely random, and he will not leave Bunker Hill if the player character waits, only if they sleep or leave the cell and re-enter it. As such, it is possible to follow him out from, but not to, Bunker Hill from another cell.

Doc Weathers appears only in Fallout 4.

The doc with Idiot
Add an image to this gallery

Retrieved from "https://fallout.fandom.com/wiki/Weathers_(Fallout_4)?oldid=3328388"
Community content is available under CC-BY-SA unless otherwise noted.