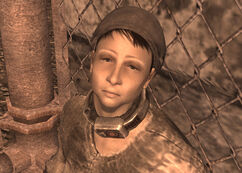 Mrs. Weathers is a slave being held captive in Cottonwood Cove in 2281.

Mrs. Weathers and her two children, Kenny Weathers and Sammy Weathers, were captured by Caesar's Legion while relocating in the Mojave.

Her abusive husband, Frank Weathers, abandoned them to the Legion after fleeing an attack.

After completing the quest Left My Heart she will run to the Old Mormon Fort within Freeside with the rest of her family and will thank the player for saving her. If you free her while Legion members are still active, and she dies, her children will say that you killed her.

If the Courier decides to follow the Weathers to Freeside, Mrs. Weathers may be killed by a bighorner or another NPC, as the route the Weathers take to Freeside contains various threats such as Fiends and Jackals. If so, her children, Kenny and Sammy, will blame the player for their mother's death.

Retrieved from "https://fallout.fandom.com/wiki/Weathers_(Fallout:_New_Vegas)?oldid=3161181"
Community content is available under CC-BY-SA unless otherwise noted.