Fallout 3
“This is the Weatherly Hotel. It`s the finest establishment in Rivet City.”— Mister Buckingham

The Weatherly Hotel is located on the Upper Deck of Rivet City and is owned by Vera Weatherly. It is managed by Mister Buckingham, a robot who also acts as the hotel's bartender.

The layout of the hotel consists of a hallway with three rooms. The front desk is a half-circle desk with a working terminal. Mister Buckingham is usually found behind the desk, while Vera Weatherly stays in the room behind it.

The Weatherly Hotel appears only in Fallout 3.

Bethesda Softworks, the makers of both Fallout 3 and The Elder Scrolls: Oblivion, use the name Weatherly in both games. In Oblivion, the twin brothers Jemane were driven from their home (Weatherleah) by ogres, and it is the player's mission to reunite them and secure their home once more. The quest Those! is mirrored by the Jemane questline, both relating to destroyed homes and long-lost relatives. 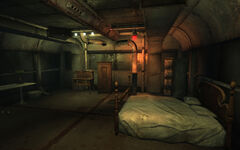