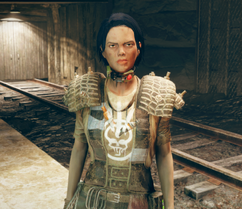 Carleton Mine
The Crater

Formerly a member of the Blood Eagles before the new raiders came back to Appalachia, Weasel ratted on someone during her time in the gang. In retaliation, the gang used a red hot poker to burn her voice box, leaving her mute. Sometime later, when she joined Meg's gang, they liked her but named her Weasel when they discovered the reason she had no voice, so that way people knew that she was a rat. She indicates that she is still seeking revenge against the Blood Eagle responsible for her condition,[1] though she is thankful to have only lost her voice.[2]

Caleb Fisher made her a voice collar so she could talk using Eddie Harrison's research, which he found in his house while scavenging in Monongah. Even though the collar allows her to speak, she cannot say mean or bad words, as the collar has no vocabulary for that.[3]

A skilled tracker, she was enlisted by Fisher to shadow Lucky Lou and ensure his safety after he left the Crater, with Fisher able to follow their progress using a radio beacon he built into her collar.[4]

Cheating Death: Weasel is met inside Carleton Mine, and accompanies the Vault Dwellers through the mine in search of Lucky Lou.

After the completion of Secrets Revealed for the raiders, Weasel will be found in the Crater Core, offering only greetings and floating remarks.

Weasel appears only in Fallout 76, introduced in the Wastelanders update.

Retrieved from "https://fallout.fandom.com/wiki/Weasel?oldid=3425903"
Community content is available under CC-BY-SA unless otherwise noted.