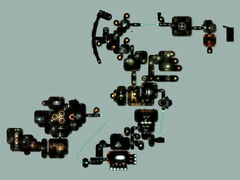 Map of the weapons lab and observation deck

The weapons lab is a location on board Mothership Zeta. The player must travel via this location as a part of This Galaxy Ain't Big Enough... quest.

The weapons lab is where much of the aliens' more offensive technology is tested. This facility is located on the upper level of Mothership Zeta through a door leading from the observation deck. As the name indicates, the Lab is the place where alien weapons are being created, thus, many standard weapons as well as several unique versions of these weapons can be found here.

Passing through the door near the teleporter that has inconveniently been deactivated, leads to a large room. Almost immediately there will be a confrontation with two ceiling mounted alien turrets. Additionally, a couple of aliens and a guardian drone inhabit this room. Heading southwest, there is a small room on the right (open it via the control panel just next to it with a science check of 75) that holds the atomic pulverizer, which is a unique and slightly upgraded version of the alien atomizer.

Continuing through this passageway will lead to a three-way intersection. Left is a blocked passageway, right goes to a flight of stairs. Go up the stairs and then take the first left to wind up on the platform from which the aliens first encountered in this room were. On this level there is a healing archway to the left and a control panel for opening up the next area. After activating the control panel, go south down a set of stairs from the platform and then proceed to a another alien/drone-infested room via the east door. Continue on to find a room full of weapons and armor for the taking.

This is also the only place where experimental weapons drones can be found. Outside of the experimental drone room, the control panel for alien captive log 24 can be found. After the "shopping spree", go through a door to the north and explore a range/training area, which allows the player character to receive Xenotech Expert perk. To move onward with the mission, go to the southeast door into the experimentation lab.

This section is transcluded from Xenotech Expert. To change it, please edit the transcluded page.

To get this perk, the player character must find a "shooting range" in the weapons lab (a room with an alien atomizer and an alien disintegrator next to a switch). The ranges are in approximately the center of the map north-to-south, and on the eastern side. Activating the switch closest to the door summons brahmin, while activating the far switch teleports enemies abducted by the aliens to a second range.

In order to get the perk, 10 enemies must be killed with alien weapons consecutively. There are four types of enemies at the shooting range:

The weapons lab appears only in the Fallout 3 add-on Mothership Zeta. 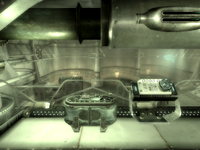 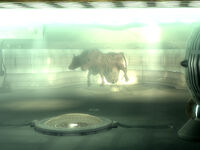 Atomic pulverizer and Buttercup toy
Add an image to this gallery
Retrieved from "https://fallout.fandom.com/wiki/Weapons_lab?oldid=3097647"
Community content is available under CC-BY-SA unless otherwise noted.