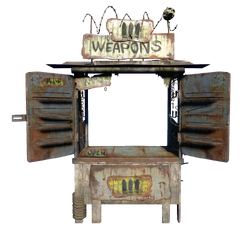 Weapons dealers are settlement objects in the Fallout 4 add-on Nuka-World. They require Wasteland Warlord rank 2 to build, and can only be built in raider-controlled settlements.

Wepaons dealers are similar to the settlers' merchant stores in normal settlements. However, these stores are instead controlled by members of the Nuka-World raiders that have taken over settlements in the Commonwealth. They are not tiered like the weapons stands.

Retrieved from "https://fallout.fandom.com/wiki/Weapons_dealer?oldid=3143202"
Community content is available under CC-BY-SA unless otherwise noted.