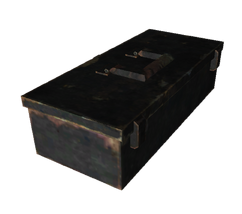 Increases the condition of the currently equipped weapon

The weapon repair kit is a consumable item in Fallout: New Vegas.

The weapon repair kit is a consumable item that restores the condition of Courier's currently-equipped weapon, similar to the alien epoxy in the Fallout 3 add-on Mothership Zeta. It can be crafted at a workbench with a Repair skill of 50.

It repairs the condition of the player character's active weapon based on their Repair skill level:

The repair kit script (RepairKitEffectSCRIPT) states that the code of the script was taken directly from the alien epoxy script from Fallout 3, except for a number of minor changes and improvements.[verified]

Retrieved from "https://fallout.fandom.com/wiki/Weapon_repair_kit?oldid=3430457"
Community content is available under CC-BY-SA unless otherwise noted.