We Will All Go Together 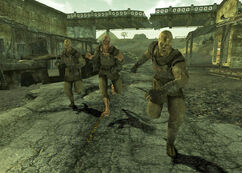 “Thank you, every tag you bring me is one more soldier at peace.”— First Sergeant Astor, Fallout: New Vegas

We Will All Go Together is a side quest in Fallout: New Vegas.

The irradiated town and NCR base known as Camp Searchlight has been transformed into a nuclear nightmare. Feral trooper ghouls roam the irradiated town, attacking anyone unfortunate enough to cross their path. A small camp just to the west of the town's radiation signs is home to a squad of NCR soldiers, being led by First Sergeant Astor. One can ask about what has happened, which begins the Eye for an Eye quest. Continuing further into the dialogue, Astor then details that he was stationed at Camp Searchlight before the incident. Asking him if there were any survivors, he will mention that his comrades have been transformed into feral ghouls, and deserve a soldier's death. He is not willing to kill them himself, but wonders if the Courier would be willing to do it for him. Astor requests that they bring their dogtags to him in return for caps for each dogtag, and a service rifle in exchange for 10. He then provides Rad-X and RadAway to counteract the cloud of radiation hanging over Searchlight.

Although Astor mentions he wants "at least" ten dogtags found, there are only ten on the local ghouls in Camp Searchlight, and they cannot be turned into Quartermaster Mayes like the usual NCR dogtags because they're "irradiated." One must move forward into Searchlight, and wipe out each and every one of the trooper ghouls in the area. (Pay special attention to those who don't have the feral ghoul model.) There are 9 of these tags to be found in this manner. Several feral trooper ghouls can be found:

Note Only nine dogtags can be found from these ghouls. To finish the quest, either search the dwellings in and around town (which will be locked unless one has completed Wheel of Fortune), and locate any additional bodies in there, or deal with Private Edwards. Because the remaining segment of this quest is buggy and deals with many conditional dialogue options, it is highly recommended that you save prior to turning in any dogtags and prior to speaking with Private Kyle Edwards.

A final dogtag is around the neck of an NCR soldier inside a single story Searchlight home southeast of the Searchlight west church. Enter the house and confront the ghoulified trooper: Private Kyle Edwards. At this point, the courier may obtain the dogtag by:

When Private Edward's situation has been resolved, return to First Sergeant Astor and cash in the dogtags. This may be done at any time.

The quest title refers to the song "We Will All Go Together When We Go" by Tom Lehrer. The lyrics for the song talk about the inevitably total devastation of nuclear war in a darkly humorous manner with a light upbeat melody.

Retrieved from "https://fallout.fandom.com/wiki/We_Will_All_Go_Together?oldid=3408142"
Community content is available under CC-BY-SA unless otherwise noted.
... more about "We Will All Go Together"
RDF feed
Has platform
Playstation 3 +, Xbox 360 +  and PC +