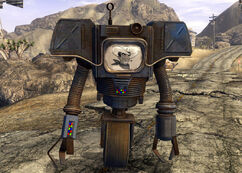 “You need to be careful, it's dangerous out here!”— Victor

We Must Stop Beating Like This[1] is an unmarked quest in Fallout: New Vegas.

Leaving the main road near Goodsprings may be dangerous for lower level player-characters, since the wastes nearby are full of hostile creatures.

Victor, however, will look out for the main character and eliminate their enemies.

Retrieved from "https://fallout.fandom.com/wiki/We_Must_Stop_Beating_Like_This?oldid=2866868"
Community content is available under CC-BY-SA unless otherwise noted.