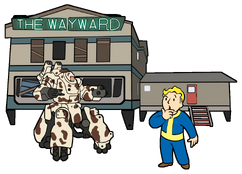 “Discover the fate of Appalachia... and its people.”

Wayward Souls is a main quest in the Fallout 76 update Wastelanders.

A full year has elapsed since the Reclamation Day. The Vault Dwellers succeeded in containing the Scorched threat. Although not eliminated, they are no longer an extinction-level threat to humanity, and humans are starting to return to Appalachia, establishing new settlements, outposts, including a bar.

Returning to Vault 76, or upon exiting it after completing "Reclamation Day," speak with Pennington by the "Vault-Tec Celebrates 300 Years Of America" arch where he is normally found, and he mentions noticing a pair of, what he calls "non-Vault types," standing in the courtyard below. He asks the player characters to see what they want. Upon speaking with the two women, Lacey Drummond and Isela Mejia, they mention a new tavern that recently opened just down the hill named "The Wayward" sent them up to the vault as they heard rumors of treasure inside, only to learn that Vault 76 is sealed and inaccessible due to its programming to shut down once all Vault Dwellers have left. With little other options left to them, the women suggest the player characters head down to the bar and speak with the owner regarding the treasure rumors they heard about.

Once there, head inside to find the owner, Duchess, being held at gunpoint by Batter, demanding information on someone named Crane. The player characters can either try to intervene of their own accord, but if not, Batter is shot and killed by Duchess' local regular, a ghoul named Mort. If the player characters intervene, Batter will still meet his end by Mort's hands and his 10mm pistol, or by both Mort and the player characters if he turns hostile.

The conversation and actions of those involved depend on the conversation option chosen, especially if it was a SPECIAL-related option, based on the choice made before leaving Vault 76 during "Reclamation Day". The possible outcomes are as followed:

After this interaction, Duchess can be interacted with, both as a vendor and with inquiring as to the altercation the player characters just witnessed. If having just completed "Reclamation Day", Duchess can be asked about the next holotape that the Vault 76 overseer originally leaves in her cache at her camp across the street from the Wayward. If certain conversation options are chosen, Duchess asks the player character to set up a ruse in their C.A.M.P. to lure more of Batter's kind to them to get information on their leader in the hopes of getting them to leave her alone. She also suggests to the player characters that, if they need help with their C.A.M.P., just ask Mort since he knows a thing or two about them. This completes the quest and begins the next one, Hunter for Hire. If fresh out of Vault 76 as well following "Reclamation Day", this also starts "First Contact".

Retrieved from "https://fallout.fandom.com/wiki/Wayward_Souls?oldid=3468371"
Community content is available under CC-BY-SA unless otherwise noted.