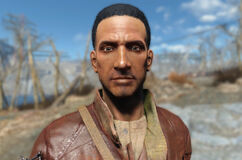 Wayne spawned with base id

Wayne Tournquist was a husband, father, an employee of Med-Tek Laboratories and survivor of the Great War. He, along with his family, made his home in the suburb of West Everett Estates before, during and after the Great War.

A citizen of Malden, Massachusetts, Wayne's children were guaranteed entry into their local vault, Vault 75, being subsidized by the federal government[1] as part of the vault's experiment. However, neither he nor his wife Bonnie trusted his employers, their children's teachers, nor Vault-Tec. Instead he, together with his family constructed a plan to survive together.

Throughout the summer,[2] Wayne constructed a backyard bunker and secretly hacked his director's terminal, putting in a code that forwarded his logs to him. He also instructed his children to run and hide from their teachers in the event of danger, promising them that he would come and get them.[3]

On October 23, 2077, Wayne's director got advanced notice that the Great War was imminent and fled; the rest of his coworkers were trapped when the lockdown was enacted. His eldest son Michael, managed to get his younger brother David away from the teachers and hide. Wayne traveled on foot from his office at Med-Tek Research to Malden Middle School to rescue his children. Together, they made it to their home at the West Everett Estates and in their shelter just as the planes were passing overhead.[3] His wife Bonnie, however never made it home, becoming trapped at work at the Mass Bay Medical Center.[4]

Life in the shelter was a combination of fear and sorrow.[3] Wayne and the two boys stayed in the bunker for almost three months, during which Wayne heard scattered radio reports of fighting within Boston and hoped his wife would make it home. To help guide her or otherwise let her know they were still alive, Wayne set up the ham radio in the bunker to repeat broadcast the separated family radio signal. Unable to leave the children alone, he could not bring himself to go look for her. All he could do was tell David that their mother was coming home and that she was still at the hospital helping people. Michael only glared at him for telling lies.[5]

The family finally emerged from their shelter the night of January 27, 2078. Their plan to tap into the main from the water tower worked, but the piping took more duct tape than expected and was badly leaking. They did not have any more in the house, so he tried to sneak over to the Cobbs' house across the street. Wayne figured that Ron Cobb would have duct tape because of his occupation in construction. To Wayne's surprise, the cold barrel of a gun was pushed up against the back of his head when he entered. Ron told Wayne to turn around slowly, and he was shocked at the level of radiation poisoning he had. Wayne begged him to stop, but he put the gun in his mouth and cocked back the hammer. He heard the gunshot, but when Wayne opened his eyes, Ron was falling to the ground, and Wayne spotted Lance Ames from down the street up on Wayne's roof. He saw the whole thing and saved Wayne's life. The Ames had just returned after finding themselves stranded in Connecticut. Lance said he had a plan and to meet him tomorrow night.[6]

For the next three months, the Tournquists and Ames worked together to barricade and fortify the neighborhood.[2] To get the biggest part done in a night, together Wayne, Lance and Leon Ames stole a couple of trucks from the Irish Pride Industries shipyard nearby. Lance had him pull them around to the edges of the yards to start the wall. Wayne, however, flipped his and almost crushed his house. It was another month before they had the rest of the wall ready. They kept watch in shifts, and the kids all enjoyed getting to come outside.[7]

On April 30, he celebrated his wife's birthday with his children, trying to bake a cake but ultimately opening a can of frosting and writing in his journal.[7] This, however, was the end of their good fortune, as Leon had, a month prior, made a fatal mistake. He and his brother were scouting when they came upon a group of former rioters, and immediately Leon started shooting off his mouth about their fort. They let the pair go but followed them home.[8] The strangers, in reality a group of raiders, later attacked the settlement. In the commotion, Wayne took his children and fled under fire.[9]

Wayne's logs and his wife's holotape indicate that much of Boston and its inhabitants survived the initial nuclear exchange, as did elements of the military, as gunfire and explosions were reported by Wayne up to three months after the Great War.

Wayne Tournquist is mentioned only in Fallout 4.

Retrieved from "https://fallout.fandom.com/wiki/Wayne_Tournquist?oldid=3184394"
Community content is available under CC-BY-SA unless otherwise noted.