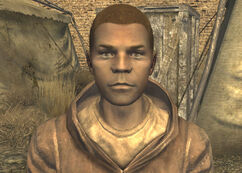 “I ain't got any reason to talk to you. Scram.”

Wayne is one of the three Freesiders that were attacked by NCR soldiers in 2281 precluding the quest G.I. Blues, along with his friends Roy and Farris.

Wayne is a scavenger in Freeside. He, Roy and Farris just cashed in some scrap metal and decided to go to the Atomic Wrangler to try their luck at gambling when an attack occurred between two parties and they were caught in the crossfire.

Retrieved from "https://fallout.fandom.com/wiki/Wayne?oldid=3293851"
Community content is available under CC-BY-SA unless otherwise noted.