The Watoga Underground is a location underneath the Appalachian city of Watoga.

An automated underground parking garage below the futuristic city, this location was designed to keep the above-ground city walkable, free of illegally parked automobiles, traffic and hit-and-run accidents.[1] The expansive series of automated parking garage systems allowed citizens to drop off their cars for storage within silos below ground.[1]

Several garage entry points are found throughout the city, providing entrance to the facility. Pre-War residents could also take advantage of other automated services such as vehicle detailing, maintenance, short and long term storage, and repair.[2] A concierge service was available to provide any needed information, and vehicles could be rented, purchased, or sold.[3] The complex featured an expansive waiting area with amenities such as a hair salon, fine dining, shops, a pharmacy, and spa services.[1]

To gain entrance, residents were required to enter their personal ID at an entryway terminal where services could be ordered.[1] Vehicles could also be searched for via the terminals by owner name or by license plate.[4] The human staff at the parking facility were in charge of safety initiatives such as preventing errors in vehicle routing or calling for a stoppage in case of a threat to human operators.[5] The procedures outlined that if a situation was determined to be of no actual risk, lost time would be withheld from employee paychecks.[5]

Human employees were also utilized for security operations, verifying owners by way of Vehicle Identification Number spot checks, alerting local authorities in regards to those who failed.[6] In addition, stock employees were reminded to follow all procedures concerning restocking shelves for the automated repair system, to ensure that each item is placed precisely on the appropriate shelving unit.[7] Due to issues in the past with the procedure, several complaints had been lodged, such as tires being attached to steering wheels and trunks filled with coolant.[7]

When the Vault Dwellers arrive at the facility, the area is inhabited by Blood Eagles. The location acts as their main base of operations, and the gang has since adorned the silos with logos, signs, and flags.

The entrance to the underground is locked until the beginning of the quest Thicker Than Water. The location is also accessible after the questline's conclusion. Blood Eagles will be present in all instances.

From ground level, the garage entrance in Watoga will lead down a set of escalators to a row of standing terminals. From here, Garage A is visible through the windows, and progressing to the floor below leads to two thoroughfares with railway-like pathways for vehicle transport and storage. Garages A, B, and C are connected via these pathways, blocked at some tunnel junctures by vehicles, but circumvented by following the opposite tunnel.

Enemies present throughout the garage sections include Mister Handies and Eyebots. Before reaching the repair area, a jammed door can be interacted with, presenting a multi-option skill check. It can be opened with +8 Strength, +4 Intelligence, or +12 Luck, revealing a medical clinic with aid items.

A shopping area is beyond Garage A, including a car dealership and Jooky Hair Salon‎. The dealership will be inaccessible unless the Thicker Than Water questline is active. Past the shopping area, progressing to Garage B results in encountering hostile turrets and protectrons. On the far end of Garage B, one can find a security terminal in an office that will disable the turrets in both Garage B and C. There are giant ants and radrats in this area. 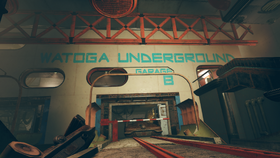 Further down the hallway, the signage on the wall indicates Garage C is up ahead, and the path forks. One can traverse down the stairs, leading to a tinker's workbench and an armor workbench. A terminal in Garage C can be used to unlock the furthermost garage door and progress into the maintenance area. Equipment for services such as vehicle repair and the detailing depot are affixed to the wall or to adjustable arms. The long term storage section can also be discovered but the garage sections are inaccessible.

Further down the hallway at this point will lead to a side path labeled "high speed transfer" where several Blood Eagle guards are standing watch. The path ahead traverses past double doors and through the successive depots. On the left toward the end of the path, there is a terminal that can shut down the nearby turret. A branching righthand side doorway leads to a power armor station.

These towers are where the vehicles were stored, still situated in their assigned sections up and down the perimeter walls. They can be examined by the Vault Dwellers but have no interactions available. The vehicles line the round silo, reaching upward. A large pillar in the middle orchestrates a cart apparatus, placing and moving vehicles into the open slots. The first silo encountered is devoid of Blood Eagle accouterment, but the remaining have been outfitted by the gang's symbols and decor.

The silos contain a large number of pristine vehicles, including Atomic V-8s and Blitzes, Cherry Bombs, station wagons, and Pick-R-Up trucks. These variants of vehicles will not explode if struck.

Past Silo 3, the path continues down a hallway. The righthand side doorway leads to a chemistry station. A large contingent of gang members and robots are present in Silo 4. A wooden walkway bypasses the blocked garage doors and on the other side, a button can be activated to open the main garage door, leading back to the salon area where the turrets can be disabled via terminal and the Thicker Than Water questline concludes.

Watoga Underground appears in Fallout 76, introduced in the Wastelanders update.

An overview of the storage process