Watoga High School is a location in the town of Watoga in the Cranberry Bog region of Appalachia.

Once the heart of Watoga's school system, Watoga High was known for its excellent quality of technical education[Non-canon 1] and a history curriculum best characterized as corporate propaganda, focusing on RobCo Industries and Vault-Tec Corporation as giants of the American economy.[1] The school's team name were called the Lions and its Robotics Club created Insult Bot.[2]

In keeping with the principles of individual liberty and happiness, the school also mandated a strict uniform policy, restrictive nutrition guidelines and, in the case of costume-centric events like Halloween, an Appropriate Costume Guide.[3] Protectrons were stationed throughout the school to enforce the policies, which included scanning all incoming packages - something the older kids, smuggling in moonshine from holdouts not yet ejected by the corporate goons, learned the hard way.[4]

The school was one of several participating in the pilot Sugar Management and Re-education Terminal program (SMART) launched by the Federal Fitness Registry and RobCo Industries, allowing students to trade in candy in exchange for a variety of items vetted by professional educators and fitness experts with the goal of fostering physical and/or academic development. Ostensibly, by helping them learn to make SMART choices about their diets and exercise, the program was to ensure a strong and reliable citizenry, able to adapt and thrive in these difficult times (and obey authority).[5]

The Watoga High School drama department was working on two productions at the time of the Great War: Armor Ace and the Power Patrol: The Musical, which was set to open on November 6, 2077,[6] and Shakespeare's A Midsummer Night's Dream, for which auditions were slated to be held after school on an undated week.[7]

Watoga High School is located in the southeastern part of the city, just next to Watoga Station. Access is possible through either the front door, leading directly into the lobby, or the side stairwell that leads to the roof. The interior of the high school has two floors, oriented around the main lobby with a bronze lion statue. Just next to the main entrance is the main stairwell that leads to the roof. From the lobby, exits lead into all of the four cardinal directions.

The northern half of the building contains the teachers' office and headmaster's office, as well as the two-level auditorium on the ground floor and the wardrobe for pupils appearing in the play. The curtain can be moved up and down from the booth or using buttons on the support columns, while the upper floor can be accessed through a staircase leading to the upper viewing box. The upper floor on the northern half contains the restrooms, break room for teachers, and the science lab with chemistry stations.

The eastern part of the building includes a curved dining area for pupils and teachers that connects the main staircases leading to the upper floor and the two halves of the building. There is also the art gallery, with a robobrain teacher, Vincent May-Lilly, still milling about along with examples of the pupils' artistic skills.

Power armor location on the roof 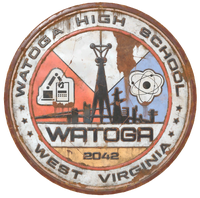