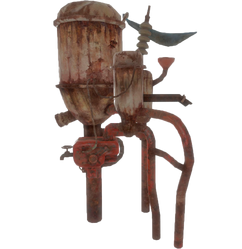 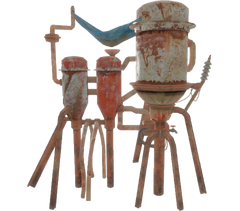 A water purifier is a settlement object in Fallout 4.

The water purifier and industrial water purifier generate varying amounts of purified water in whichever settlement they are built in. Their production rates are much higher than that of a basic pump (10 and 40 respectively, instead of 3), usually making them the superior choice. However, this is counterbalanced by their need for electrical power, the considerably larger amounts of crafting components required to build them, and the fact that only a handful of settlements can support purifiers at all (refer to the list below).

Similarly to water pumps, should the water production exceed the settlement's demand, a proportion of any excess water (random, but usually about 75% of the surplus) will be placed in the workshop inventory on a regular basis, subject to certain caps (see below). Building multiple purifiers increases the surplus production accordingly.

When setting up such an operation, some things are important to keep in mind:

Water purifiers must be placed on top of a water source such as a stream or pond, and require power to operate.

Not all settlements offer the opportunity to build water purifiers due to a lack of suitable water sources. Below is a list of settlements that can support at least one purifier.

Retrieved from "https://fallout.fandom.com/wiki/Water_purifier_(Fallout_4)?oldid=3251865"
Community content is available under CC-BY-SA unless otherwise noted.