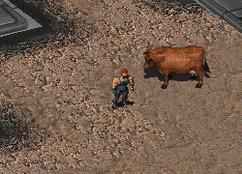 The water merchant trader is an employee of the Water Merchants in the Hub around 2161.

He has all the information about when water caravans leave, the pay for each job, and so on. He mentions that the pay is somewhat low for a caravan guard, however the routes aren't very dangerous.

Guard the caravans: After talking with him about jobs for the caravan, the Vault Dweller can finalize the guard job by talking briefly to the Master Merchant.

The water merchant guard appears only in Fallout.

Retrieved from "https://fallout.fandom.com/wiki/Water_merchant_trader?oldid=3127524"
Community content is available under CC-BY-SA unless otherwise noted.