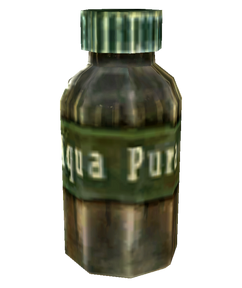 This quest becomes available after Broken Steel has been downloaded and the quest Holy Water has been completed. In front of the town, where the normal caravans are, some Megaton settlers will try to take the Aqua Pura from the Brotherhood of Steel escorted scavenger.

Caravan in the Big Town
Add a photo to this gallery
Retrieved from "https://fallout.fandom.com/wiki/Water_Caravan_Squabble?oldid=3176075"
Community content is available under CC-BY-SA unless otherwise noted.