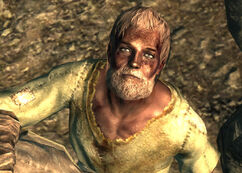 “I've been drinking this irradiated shit and... I can't do it. I just throw it up now. I need purified water... please...”— Water beggar

Water Beggars is an unmarked and repeatable quest in Fallout 3.

A lot of wastelanders are suffering dehydration and need purified water, which when given to them rewards the Lone Wanderer with positive Karma (+50). Denying them water causes them to die at the next map change, even if they were given purified water before. However, telling them to find their own water, and then giving them water is fine, and they live on. They do not die if they are not explicitly told to find their own water, however, and their death inflicts no karmic penalty on the player character.

Retrieved from "https://fallout.fandom.com/wiki/Water_Beggars?oldid=3341920"
Community content is available under CC-BY-SA unless otherwise noted.