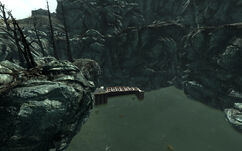 The wastelander lake hideout is a camp established behind an irradiated lake near the far top of the Capital Wasteland. The remains of a scientist, wastelander, and a raider can be found here.

To get to this location, the Lone Wanderer must head west-northwest of Oasis. Several Enclave soldiers will set up camp nearby if the player character has completed The Waters of Life.

The camp is hidden across the lake, behind part of an old dump truck. A bed, several RadAways, chems, and a safe can be found in a small area here. The safe contains random caps and chems. The corpse of a scientist wearing a radiation suit can be found next to a dead wastelander in this small area, both lying in blood. A lone raider is also found a few feet away from the bodies, drowned in water.

Near here, east-southeast of the radio tower, added by add-on The Pitt, and north-northwest of MDPL-21 power station, is a hard-to-reach bridge that connects two hills. It leads to a power tower on one side, but nothing notable on either side.

The wastelander lake hideout appears only in Fallout 3.

D.C. Journal of Internal Medicine
Add a photo to this gallery
Retrieved from "https://fallout.fandom.com/wiki/Wastelander_lake_hideout?oldid=3214919"
Community content is available under CC-BY-SA unless otherwise noted.