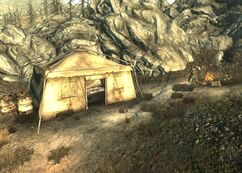 The wastelander campsite is an unmarked location in the Capital Wasteland. It is situated on the very edge of the map, southwest of the yao guai tunnels and west of Rockopolis.

The location is difficult to spot, due to being surrounded by cliffs on three sides. The tent can also be difficult to see, as it is camouflaged against the rocks. Here one will find two wastelanders around a campfire listening to a radio.

On top of the nearby rock spire, there's an elevated platform providing an ideal observation perch for a sniper, therefore suitably, a sniper rifle and ammunition box can be found near a chair. The tent itself contains a ham radio, a usable bed, two first aid boxes, and other minor loot. A plasma grenade may be found in one of the pots. Behind the tent are another ammunition box and a mine box.

The wastelander campsite appears only in Fallout 3.

Another view of the campsite
Add a photo to this gallery
Retrieved from "https://fallout.fandom.com/wiki/Wastelander_campsite?oldid=3208063"
Community content is available under CC-BY-SA unless otherwise noted.