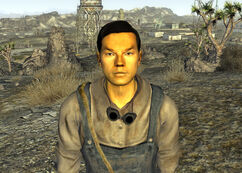 A wastelander wandering the area west of Novac

Wastelander is a general term for anyone living in the wasteland who is not affiliated with a group or organization. They make a subsistence living off the land, trade with local settlements, and try not to be ravaged by the abundant, and usually hostile wildlife, or roaming raider gangs such as Jackals and Vipers. Most are not hostile at first but will defend themselves if attacked. When that happens, they usually die, quickly.[1]

Wastelanders can be found as corpses at various locations across the Mojave Wasteland. Because they are set as respawning non-player characters, they may sometimes be found alive wandering around their spawn area, but with 0 health which results in an instant kill. They have no unique dialogue other than the repetitive, "I'll mind my business, you mind yours," and some other lines of generic dialogue.

All wastelanders are found in fixed locations such as:

Retrieved from "https://fallout.fandom.com/wiki/Wastelander_(Fallout:_New_Vegas)?oldid=3227411"
Community content is available under CC-BY-SA unless otherwise noted.