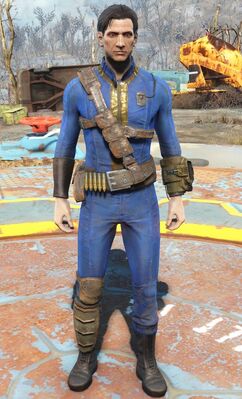 The leg and chest piece worn over a vault jumpsuit

Reduces damage from super mutants by 15%

Wastelander's armor is a unique set of leather armor in Fallout 4.

Wastelander's chest piece is leather armor that comes with the BioCommMesh mod (increasing chem duration by 50%), is fairly inexpensive and available as soon as level 1, making it the best way to get a biocommesh mod early game.