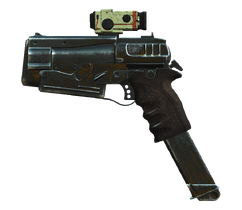 The Wastelander's Friend is a unique weapon in Fallout 4.

The Wastelander's Friend is a unique 10mm pistol with randomly generated modifications. It bears the Crippling legendary effect, which allows it to inflict 50% more limb damage against enemies.

It also has a unique recon scope. Unlike other recon scopes in the game, this one does not come with short or long prefix corresponding to the amount of magnification when zoomed in. This particular recon scope has a "very short" zoom resulting in a much wider field of view when in use.[citation needed]

Sold by Deb in Bunker Hill.

Retrieved from "https://fallout.fandom.com/wiki/Wastelander%27s_Friend?oldid=3199114"
Community content is available under CC-BY-SA unless otherwise noted.