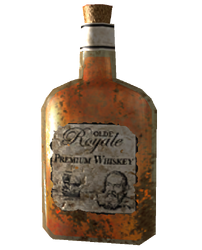 Wasteland tequila is an alcoholic drink which can be brewed by the Courier. Like many other types of alcohol, it boosts Charisma and Strength while lowering Intelligence for the duration of its effects. It also gives added resistance to poison and is visually identical to a bottle of whiskey.

Note: Poison resistance is not affected by Survival skill level.

This item must be crafted, as it is not found on enemies or in containers.

In addition to negating the penalty to Intelligence, the Whiskey Rose perk adds a +3 to +9 DT effect to wasteland tequila (which is also Survival dependent), a larger boost than is provided by standard whiskey.

Retrieved from "https://fallout.fandom.com/wiki/Wasteland_tequila?oldid=3424003"
Community content is available under CC-BY-SA unless otherwise noted.