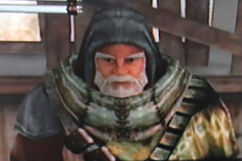 Defeat all enemies in Gladiator Pit

The wasteland stranger is a champion of Gladiator Pit in the ghoul city of Los.

The Wasteland Stranger is a mad man wielding a very powerful turbo electric plasma rifle, to kill his opponents. If all other combatants in the arena have been defeated by the Initiate, the Wasteland Stranger can be fought as the final challenge, and the reward for defeating him is 50000 caps. The stranger says no words, and is probably not only kept alive by the Church of the Lost to fight in the arena, but also enjoys it.

The wasteland stranger appears only in Fallout: Brotherhood of Steel.

The wasteland stranger is also an in-game nickname of Vault Dweller, who also appears in the game. Moreover, this character uses almost the same game model as the Vault Dweller.

Add an image to this gallery
Retrieved from "https://fallout.fandom.com/wiki/Wasteland_stranger?oldid=3241395"
Community content is available under CC-BY-SA unless otherwise noted.