Wasteland Outfits are common outfits for wastelanders in Fallout 3.

Crudely made, they provide only the most basic protection and are easy to come by as they can be bought from several traders, can be found on many corpses or inside several homes throughout the Capital Wasteland.

A dirty off-white in color (grey for the coveralls), the brahmin-skin outfit consists of a crudely-stitched pair of coverall trousers and a patched shirt. They appear to have received only the most rudimentary treatment in tanning and tailoring. It is used by the poorest of wastelanders.

The Wasteland settler outfit consists of a green shirt and a pair of grey-brown trousers. It is used by the poorest of wastelanders.

The Wasteland wanderer outfit is plain clothing with a hood. It is a unisex outfit; the male version looks exactly like the female. It is used by the "middle class" wastelanders.

A ballcap which comes with a pair of glasses. This cannot be looted or worn in Fallout 3. It can be found and worn in Fallout: New Vegas, but does not count as glasses when considering the Four Eyes trait. The cap can be found on random wastelanders and occasionally on Traveling merchants.

Biker goggles are made up of two clear glass lenses and are kept over the eyes with a leather strap.

Biker goggles are often found on raiders and wastelanders. They can also be bought readily from merchants that specialize in selling general goods(such as Moira Brown) and clothing(such as Crow). They very often can be easily obtained in perfect condition when purchased from vendors.

The stormchaser hat is a very common article of clothing sold randomly by most merchants, and worn by many wastelanders. When purchased from a vendor a stormchaser hat will usually be in perfect condition. It can also be combined with eyewear. 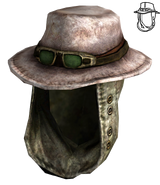 Stormchaser Hat
Add an image to this gallery
Retrieved from "https://fallout.fandom.com/wiki/Wasteland_outfit_(Fallout_3)?oldid=964060"
Community content is available under CC-BY-SA unless otherwise noted.