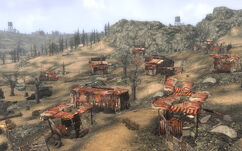 The wasteland gypsy village is an unmarked location in Fallout 3, north of the Jalbert Brothers Waste Disposal. There are four shacks in total, three of which can be entered.

The village is a mishmash of rusted shacks and derelict vehicles. The four main shacks are situated in a rough diamond shape, with two withered trees and a couple of scattered shelters that appear to be slapped together with scrap metal and wood beams. The southern most edge of the village is protected by a steep cliff and there is an inaccessible boarded up shelter door, suggesting the site might have once been a mine or crudely fashioned fallout shelter for the gypsy villagers.

A band of six hostile ghoul wastelanders inhabit this shantytown, five of which will immediately attack anyone detected in the area, and a sixth who skulks about inside the northern shack. This was once a settlement that was either overrun by a band of ghoul wastelanders, or perhaps the citizens themselves turned into ghouls, as the shacks are located within close proximity to Jalbert Brothers Waste Disposal (which is highly irradiated). One shack contains several piles of human skeletons on the ground behind a barricade of tables.

Tales of a Junktown Jerky Vendor and a Stealth Boy are located on top of a desk in the northwestern area of the room.

Duck and Cover! and a mini nuke can be found on the floor along the northern wall.

Tumblers Today lying openly inside a doorless refrigerator found lying on its back outside the southern side of the shack. 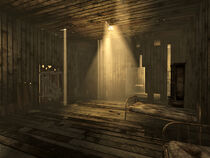 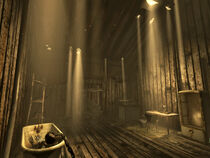 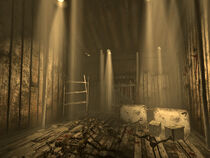 Tumblers Today
Add an image to this gallery
Retrieved from "https://fallout.fandom.com/wiki/Wasteland_gypsy_village?oldid=2963379"
Community content is available under CC-BY-SA unless otherwise noted.