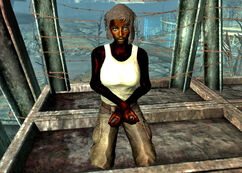 Wasteland captives are imprisoned humans captured by super mutants. They are found at super mutant encampments throughout the Capital Wasteland during 2277.

The captives are wastelanders held prisoner by super mutants.

During the quest Big Trouble in Big Town, humans from Big Town are captured by super mutants and held in the Germantown police HQ. These humans have been captured to be used as food. While in the building, a super mutant can be overheard conversing with Shorty, a captive who is about to be killed. The human asks why he is to be killed when there are plenty of human remains available surrounding them. The super mutant jailor reveals that they prefer their food to be from a fresh kill.

Uncle Leo, a friendly super mutant, suggests that captives could be used to create more super mutants. This is corroborated by dialogue overheard from other super mutants in other parts of the wasteland, who remark that they need more new recruits, and so they must abduct more humans to transform into super mutants (using FEV, or "green stuff"), which would be consistent with the method of super mutant creation practiced by the Master.

Wasteland captives appear only in Fallout 3.

A captive may, at times, not have ropes around their wrists while still acting as if they do. [verified] 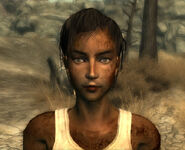 Wasteland captive and super mutant in an endings slide
Add a photo to this gallery
Retrieved from "https://fallout.fandom.com/wiki/Wasteland_captive?oldid=3269918"
Community content is available under CC-BY-SA unless otherwise noted.
... more about "Wasteland captive"
RDF feed
Has platform
PC +, Playstation 3 +  and Xbox 360 +