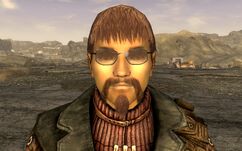 The wasteland adventurer is a unique wastelander cut from Fallout: New Vegas.

The adventurer would have been a hunter in the Mojave Wasteland, getting by through selling animal hide, among other various items.

Prior to meeting the Courier, he would stand in front of the road sign at the intersection near Jean Sky Diving. Once done talking to the Courier, he'd proceed to patrol the nearby area and at 8 pm run to the small trailer south of the Goodsprings source and sleep until 7 AM.

When spoken to by the Courier he was to give a map marker to Primm's location, as well as provide information about the sacked caravan to the north and the deathclaw infestation at Quarry Junction. He would also trade with the player character, though there are multiple vendor containers potentially associated with him, making the specifics of his intended merchant inventory unclear.

The wasteland adventurer was cut from Fallout: New Vegas.

Retrieved from "https://fallout.fandom.com/wiki/Wasteland_adventurer?oldid=3242624"
Community content is available under CC-BY-SA unless otherwise noted.