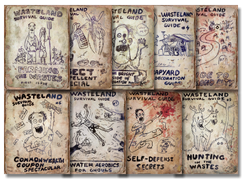 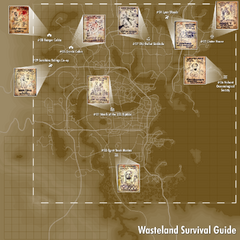 Similar to Tales of a Junktown Jerky Vendor, the Wasteland Survival Guide is a post-War edition magazine series, written and illustrated with crude pen drawings.

Reading an issue of this comic will grant a variant of the Wasteland Survival perk, (except for two) focusing on increasing survival efficiency with a specific topic.

There are nine issues in total:

Mole rats and mutant hounds are unaffected by issue #9, and will still only drop a single piece of meat. Additionally, only a single piece of softshell mirelurk meat can be acquired at a time when dropped from mirelurks.

The Wasteland Survival Guide is a carryover based on the book of the same name from Fallout 3 and Fallout: New Vegas. It was originally written by Moira Brown with the help of the Lone Wanderer. Some of the topics in the magazine were never mentioned in Fallout 3. However, other issues of the magazine (#2, #3, and #5) reference the quest itself:

Wreck of the USS Riptide

Sunshine Tidings co-op
Add a photo to this gallery

The Bright Side of Radiation Poisoning

Hunting in the Wastes

Clean versions from The Art of Fallout 4

Loading screen
Add a photo to this gallery
Retrieved from "https://fallout.fandom.com/wiki/Wasteland_Survival_Guide_(Fallout_4)?oldid=3422196"
Community content is available under CC-BY-SA unless otherwise noted.