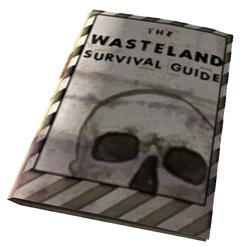 “Survive, Thrive, and Revive, that's the name of the game. The book is the Wasteland Survival Guide! Pick up your copy today!”— Three Dog, Fallout 3

The Wasteland Survival Guide is a skill book in Fallout: New Vegas.

Published by Moira Brown (with help from the Lone Wanderer) in 2277, the guide saw distribution throughout the wasteland by travelers. The book provides knowledge on how to survive the harsh wasteland. It became popular, as within a short four years, it had already reached as far as the Four States Commonwealth.

Reading this book permanently increases the Courier's Survival skill by 3 points (4 with the Comprehension perk).

With the add-on Old World Blues, this skill book can be crafted by the Courier.

Note: the recipe is consumed as part of the crafting process, meaning only one book can be crafted.

Other than being crafted, the skill book can be found in the following locations.

Waste disposal station
Add an image to this gallery

Retrieved from "https://fallout.fandom.com/wiki/Wasteland_Survival_Guide_(Fallout:_New_Vegas)?oldid=3163916"
Community content is available under CC-BY-SA unless otherwise noted.