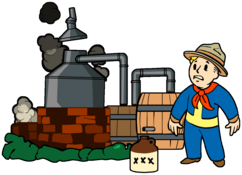 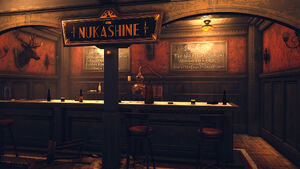 “Find the source of a dangerously potent beverage.”
“The Brewing Station is a workbench that you'll learn to construct during the 'Wasted on Nukashine' quest... During 'Wasted on Nukashine', you'll also learn to craft the Fermenter. Build one of these in your C.A.M.P. and place drinks within to reduce the wait time needed to try your latest creations.”— Inside the Vault: Wild Appalachia Preview: Brewing and Distilling

Wasted on Nukashine is a side quest in the Fallout 76 update Wild Appalachia.

To begin this quest, find one of the party posters near VTU, Morgantown, several bus stops or train stations. Alternatively, the poster can be purchased for free from the Atomic Shop and placed in a workshop or C.A.M.P. before interacting with it. The first quest marker leads to the Pi House in Fraternity Row in Morgantown, filled with corpses of students, seemingly killed while partying. Investigate the area, read Ted Dorfman's terminal, and access the entry entitled "Nukashine". Find the bottle of Nukashine on the desk next to the terminal and then drink it. Fight off the feral ghouls that spawn as party crashers for 2 minutes, and then the player character will black out and wake up in a random location.

Upon waking up, inspect the Nukashine label and solve the riddle to find the source of the Nukashine - a speakeasy near the University, located in the basement of Big Al's Tattoo Parlor. There, the player character will meet Biv E. Ridge, a drunk Robobrain that gives the first part of the Nukashine ingredients note. Go to the Eta Psi House, read Judy's terminal, and select the entry entitled "Supply Room" to get the password. Go back to the speakeasy in Big Al's Tattoo Parlor and open the supply room to find the remaining part of the note. After collecting both parts of the note, find all of the required ingredients (5 corn, 5 razorgrain, 5 wood, 2 boiled waters, 1 Nuka-Cola Quantum, 3 nuclear material). The nuclear material can be found right there in the supply room. Keep in mind the high levels of radiation emitting from the leaking radioactive barrels. Corn and razorgrain can be found at the farm just south of Big Al's, along with a water pump for the boiled water. Nuka-Cola Quantum can be found at the old Kanawha Nuka-Cola plant east of Charleston, purchased from a vendor bot if they have one in their inventory, or randomly found in a Nuka-Cola machine. Finally, return to the speakeasy and use a brewing station to craft it and the Flash-Fermenter to finish it. After the Nukashine is ready, give it to Biv to complete the quest. After that, Biv can be visited daily for one of two repeatable quests to unlock additional brewing recipes.

If the party post is purchased from the Atomic Shop, it can be crafted and placed in a C.A.M.P. to instantly begin the quest without having to travel to where the fixed locations are.

Ted Dorfman shares the same surname as Kent "Flounder" Dorfman, one of the main characters in the 1978 film Animal House.

The party poster which starts this quest

"Wasted on Nukashine" loading screen slide
Add a photo to this gallery
Retrieved from "https://fallout.fandom.com/wiki/Wasted_on_Nukashine?oldid=3491219"
Community content is available under CC-BY-SA unless otherwise noted.