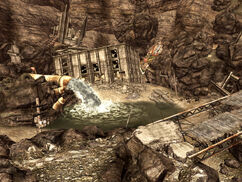 The waste disposal station is a location in the Divide in 2281.

The entrance is located to the east of Ulysses' Temple on the lowest level of the canyon. It is a small entrance in the wall that can very easily be missed or mistaken due to blending in with the surrounding landscape. There is a RALPHIE poster needed for the Feel Like a Kid Again challenge just to the right of the entrance.

The waste disposal station is reduced to a hole in the wall that extends about 30 feet back. Scattered throughout are radioactive barrels that give up to 3 rads per second. There is a skeleton located in the back with a note. The remains of a pre-War bunker can be seen through a hole in the ceiling, filled with barrels. It would appear that the presence of radioactive waste is due to the bunker floor above collapsing.

For whoever finds this.... and Marksman carbine

Satchel charge box
Add a photo to this gallery
Retrieved from "https://fallout.fandom.com/wiki/Waste_disposal_station?oldid=3158951"
Community content is available under CC-BY-SA unless otherwise noted.