The waste disintegration platform is a location in the northeast of the Big MT in the Fallout: New Vegas add-on Old World Blues.

The waste disintegration platform consists of a fairly large middle platform, with four of what appears to be solar panels on each side. In the middle of the platform are trash and rubble. A few catwalks and what is most likely the control center for the disintegrator surround the main platform. However, it cannot be used. The facility is inhabited by a group of lobotomites. When exploring the area, there are securitrons from the deconstruction plant that may fire at the player character. A metal staircase leads down into the loading station. 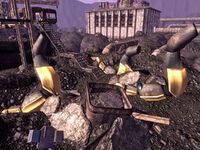 Giant robo-scorpion's remains
Add an image to this gallery
Retrieved from "https://fallout.fandom.com/wiki/Waste_disintegration_platform?oldid=3150065"
Community content is available under CC-BY-SA unless otherwise noted.