Fallout 3
“You see, some brainless super mutant thought it would be funny to shoot at the shiny round thing on the Washington Monument.”— Three Dog

The Washington Monument is a large, pre-War obelisk at the center of the National Mall in Washington, D.C. in 2277.

The battered remains of the monument are still standing, towering above the ruins of the old capital city and the battle-torn Mall. The Washington Monument can be seen from nearly anywhere in the Capital Wasteland; at 555 feet tall, it is the tallest structure in the D.C. area.

The Washington Monument has been claimed as an outpost by the Brotherhood of Steel, as it contains the signal transmitter for Galaxy News Radio. Although the Brotherhood members are leveled characters, they may be killed by the more numerous super mutants.

The entrance of the monument contains two caved-in doors and an elevator. Only the elevator is accessible, which prompts a loading screen when activated. At the top, there are some machines, which are used to relay the Galaxy News Radio signal.

Outside the barricade to the northwest, one well-armed paladin guards a checkpoint containing a stockpile of several Brotherhood-owned ammunition boxes and health items. Just beyond the checkpoint to the west, the north side of the Reflecting Pool has been mined. At least eight frag mines have been laid down to protect that approach. The defenses are not without cause, as up to five vicious dogs frequent the area and often skirmish with the paladin, sometimes setting off the mines as they advance.

To the southwest, another well-armed paladin will usually be found patrolling the perimeter outside the walls.

The Washington Monument appears only in Fallout 3, and is mentioned in Fallout 4 by Robert MacCready. It also appears in the Atomic Command Pip-Boy game in Fallout 4.

The Washington Monument, an entirely masonry-comprised structure, is based on the real world obelisk of the same name in Washington, D.C.

View from the top 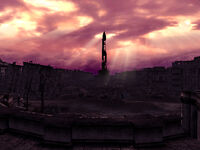 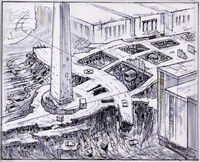 The Monument appearing in the ending slides

The Monument dominating the skyline of D.C.

Monument silhouette in the GNR poster