Fallout 3
“The only way to reach the Super Mutant-occupied D.C. ruins is by traveling underground, usually through the abandoned Metro tunnels.”— Fallout 3 loading screen

Washington, D.C., formally the District of Columbia, also known as just D.C. or Washington, was a district and the pre-War capital city of the United States of America. After the War, the city's radioactive ruins and surrounding areas came to be known as the Capital Wasteland.

Some time after the Great War, Paige - a former head of the Construction Workers Union in Washington, D.C. - and a number of other survivors took the last train out of Union Station. As they left the Capital, they saw the toxic green air lingering above the city.[1]

Around twenty years after the War, a large community of ghouls were living somewhere in the city ruins, growing with each passing day with ghouls from areas outside the Capital Wasteland such as Appalachia.[2]

In 2255, the Brotherhood of Steel arrived at the ruins of D.C., settling in the abandoned building of the Pentagon.

The obelisk that is the Washington Monument now has a wall made of concrete surrounding it and is occupied by the Brotherhood of Steel. The monument's sandstone and marble have fallen off at many places and reveal its internal metal structure. The bronze statue of George Washington has disappeared from the lobby, nowhere to be found. It also houses the Galaxy News Radio dish at the building's top.

Before the Great War, the United States Capitol Building housed the legislative branch of the government of the United States. It is located in Washington, D.C., on top of Capitol Hill at the east end of the Mall. The other side of the Capitol opens onto Seward Square. When discovered by the Lone Wanderer, it is a battle site between super mutants, Talon Company, and later, the Enclave.

The Lincoln Memorial stands in ruins at the heart of D.C.; the seated statue of Lincoln is missing its head (it is located in the Temple of the Union). Sandbags are scattered around the memorial, which is used as cover by slavers and possibly runaway slaves if a quest is completed. The head may be restored after completing a quest given by Hannibal Hamlin who leads a small unit of escaped slaves that are trying to create a haven for other runaway slaves.

The National Archives is a pre-War building that housed an agency that was charged with preserving and documenting government and historical records. The building is relatively undamaged, but the documents and records have mostly been destroyed or ruined. It has also become home to super mutants, centaurs, and robots; one of which has a personality. The super mutants have placed many traps around to keep out unwanted visitors.

The Museum of History seems to have largely escaped most pillaging other than the structural damage of general decay and trash can fires. Old posters for the space exhibit at the Museum of Technology still hang. A woolly mammoth statue sits in the center untouched by time or the Great War. Due to the decaying ruins, three of the four exhibits entryways are blocked, including WWII, the Anchorage Reclamation and the Resource Wars, leaving only the Abraham Lincoln exhibit fully intact. Further, inside the museum, the player character can find the Underworld museum exhibit, which has been converted into a city of non-feral ghouls. However, if the player explores any other parts of the Museum, they will find Lincoln's artifacts, such as the Lincoln Memorial poster, Lincoln's repeater and dozens of feral ghouls.

A dilapidated shell of its former glory, the Museum of Technology lies in ruin. The Wright brothers' Flier has fallen, its wings are broken, and a faded old Vault-Tec banner hangs nearby. A monument to man's pride and achievement, set amid the result that is currently occupied by super mutants. The Virgo II Lander remains, containing the needed communications relay dish, several Stealth Boys, and plaques about several artifacts. There is also an exhibit featuring a Vault-Tec vault, labeled Vault 106.

The Pentagon, as feared, was largely destroyed. However, its sub-levels remained intact and contained enough pre-War technology and weaponry to keep Brotherhood of Steel forces going indefinitely. But there was something else as well, Liberty Prime - a technological marvel that, if restored, could help the Brotherhood rebuild strength and reputation that had been declining steadily for years.

The Jefferson Memorial was converted to a water filtering facility with very large water pipes obstructing the main entrance. A smaller side entrance to the gift shop is open toward the west. This is used as a base for Project Purity, which seeks to provide clean water to the entire Capital Wasteland. It is the focal point of many of the main quests, particularly Take it Back!.

The White House is also a location on the map, though it is nothing more than a massive irradiated crater at this point. It appears to have been hit directly by a nuclear bomb. A Fat Man and three mini-nukes are located in it, and there are several level-dependent ghouls that inhabit the crater.

Arlington Cemetery is most of what remains of the Arlington district, including Arlington National Cemetery. To the south is Mama Dolce's food industry and in the center, there is the Arlington House. Before the bombs fell, many of the country's war heroes were buried beneath this soil. Now, it is an empty spot on the map, mostly devoid of life. The Arlington Wasteland Metro located south of Wilhelm's Wharf, opens to Arlington Cemetery.

The Anchorage War Memorial is a war memorial commemorating the battle of Anchorage, Alaska.

Andale is a location in the southern area of the Capital Wasteland. It is located northwest of the Nuka-Cola plant, south of Fairfax ruins, and southeast of Fort Independence.

Andale is touted by its residents as "the greatest town in Virginia." However, the town holds a very dark secret. Four families survived the nuclear war and remained in Andale, but eventually took to cannibalism after their food supplies ran out. Since then, the murder and consumption of outsiders, along with inbreeding between the Andale families, have become a tradition passed down from generation to generation. It is most likely because of this tradition, that Bill Wilson says that the Home Owners Association does not let random people move into the town, due to the dark nature of its current citizens.

Prior to the Great War of 2077, Bethesda was a major town in the DC area. There was Metro and City Liner service to this city. As the west-east highway ends in the city, another highway traveling north passes through the area. The city has a local park, named after the largest employer in this city, where baseball was played.

Canterbury Commons is a trading post and a small town located on the eastern edge of the Capital Wasteland, which in the year 2277, is currently suffering from a full-blown battle between two "superhumans." It is inhabited by five wastelanders and can be found north of Washington, D.C., north of Vault 108, and southeast of the Temple of the Union.

Fairfax ruins is a small town in the Capital Wasteland, located south of Vault 101, east of Fort Independence, and north of Andale.

The ruins consist of the main street, several alleys, and destroyed houses. There are upwards of twelve well-armed raiders in the vicinity, on the street, and in the tunnels beneath. North of the main road running through the center of the town east to west, is the entrance to the Fairfax Metro station.

Friendship Heights is a large apartment complex/metro station located on the northern outskirts of Washington, D.C. It grants access to Tenleytown/Friendship station (and via the metro, to Galaxy News Radio).

The ruins of Springvale town are located west of Washington, D.C. in the Capital Wasteland. Springvale school, Megaton and Vault 101 are nearby to the ruins. Raiders have established themselves in the nearby Springvale School where they prey on caravans and wastelanders, and attempt to dig an underground entrance into the Vault in order to raid it. After the battle between forces of the Enclave and the Brotherhood of Steel at the Jefferson Memorial, the Apostles of the Holy Light establish the Holy Light Monastery in the town.

An extensive transit network, providing service to Washington, D.C. and the surrounding areas. Complemented by an above-ground network of City Liner buses, the network of stations and rail lines were advertised as a faster, more convenient, cleaner commuter option.[4]

After the war, the metro network tunnels provide the means for traveling between the districts of D.C. and its neighboring communities even if above ground routes are unavailable. The stations also serve to shelter both raiders and wastelanders alike, alongside dangers such as super mutants, feral ghouls, and pre-War protectrons that still actively patrol, attacking anyone that does not have a valid metro ticket.[5]

Washington, D.C. appears in Fallout 3, and is mentioned in Fallout: New Vegas, Fallout 4,[17] its add-ons Automatron,[18] Far Harbor, and Nuka-World,[19] Fallout 76, and its updates Wild Appalachia, Nuclear Winter, and Wastelanders. 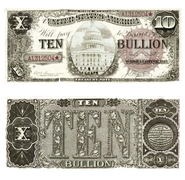 Concept art of the Capitol by Craig Mullins

Concept art of the Washington streets by Adam Adamowicz 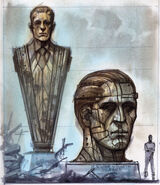 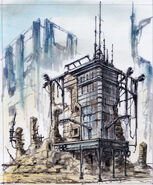 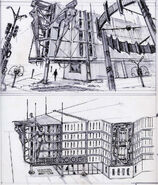 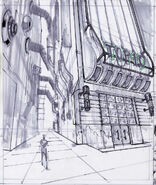 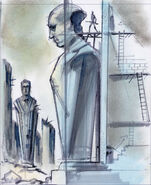 Map in Fallout 3 promotional content/Prepare for the Future 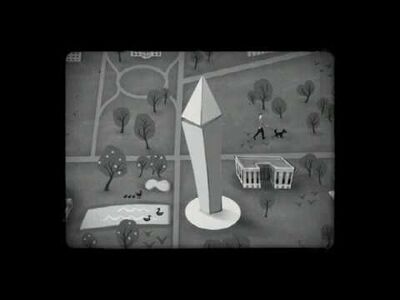