The Warren Theater is an unmarked location in the Back Bay neighborhood of Boston in 2287. It is south of the Combat Zone.

This pre-War entertainment venue[1] is divided into two rooms: a lobby on the first floor, and the theater area on the fourth floor.

Through the entrance is the lobby, which is decorated with various posters and paintings on the walls. Immediately in front of the entrance is a counter with two cash registers; one is on the counter, and the other is on the ground nearby. Above the counter are three signs labeled "bakery," "candy," and "beverages." A first aid box is under the counter. A short corridor to the east leads to the elevator.

The elevator ascends to the theater area, which features four rows of seats and the stage itself. Several mannequins stand in a group among some furniture on the stage. A synth hiding among the mannequins will attack the Sole Survivor when they approach. Various clothing accessories are scattered on the stage, with an Advanced-locked safe behind a curtain to the right.

The Warren Theater only appears in Fallout 4.

The Warren Theater is based on the real-world location of the same name at 270 Warren Street in Roxbury, which closed in 1968.

Damaged ceiling near the stage 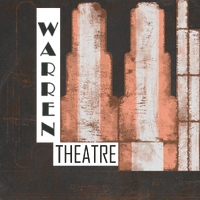