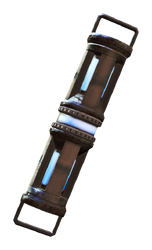 A warhead is a miscellaneous quest item in Fallout 4.

These high-yield warheads were carried by the Chinese submarine Yangtze prior to the Great War. Five of the submarine's six warheads were launched in ballistic missiles just after the war started. The sixth missile failed to launch and was still present when the Sole Survivor discovered the submarine in 2287.

At Captain Zao's suggestion, the Sole Survivor used the remaining warhead's nuclear fuel, along with a recently-acquired dampening coil, to restart the submarine's nuclear reactor and restore power. Without a functional dampening coil in place, the heat from the warhead's fuel would have caused a catastrophic meltdown and subsequent explosion of the reactor.

The warhead can be found inside the unfired SLBM aboard the Yangtze during Here There Be Monsters.

Retrieved from "https://fallout.fandom.com/wiki/Warhead_(Fallout_4)?oldid=3180934"
Community content is available under CC-BY-SA unless otherwise noted.