The Goodneighbor warehouses are three buildings in Goodneighbor in 2287. They are the base of operations of the Triggermen.

A white exterior door opens into a hallway with a large workshop room to the right. Enemies in this room may engage as soon as the cell loads, even if hidden when entering (the inside entrance is floodlit). The stairs ahead lead up to the next floor. The second floor has a sleeping area and office area to the left, off of a living area. The majority of enemies are in this area. The stairs continue in a spiral to the next floor.

The third floor is a single large area with a brazier, possibly a dining area. The stairs continue up as before. The fourth floor is a dimly lit large area with a partly barricaded section off to the left, which can conceal enemies. There are sleeping bags throughout the building that can be used by the player character, but mostly on the second floor, and a mattress on the top floor.

Warehouse adjacent to the Memory Den

Another white exterior door opens into an open area running right and left, with a workshop room to the right and stairs straight ahead. Stairs continue in a righthand spiral. The second floor ceiling is partly collapsed, allowing enemies on the third floor to fire (and be fired upon). There is a bathroom on the left.

The third floor is separated into two separate rooms. It is possible to reach the right half of the third floor by climbing the collapsed ceiling or the left half by continuing up the stairs that spiral left. The stairway that would originally have given access to the righthand room has collapsed. There are some sleeping bags in the building that can be used by the player character, and a mattress on the top floor.

Warehouse adjacent to Kill or Be Killed

Up this right angled set of open wooden stairs is the next floor. The second floor has ladder-type stairs at the far end, rooms to the left via a single doorway and holes in the ceiling through which enemies can engage or be engaged.

Going up to the third floor, the floor is three quarters open but with walls ahead and to the left. Behind the walls ahead are two rooms and access to the last room which is behind sandbags. There are sleeping bags in various parts of the building that can be used by the player character, and a mattress on the top floor.

The Goodneighbor warehouses appear only in Fallout 4. 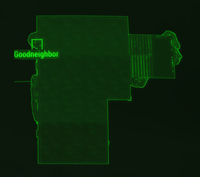 Warehouse adjacent to the Memory Den 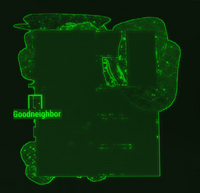 Warehouse adjacent to Kill or Be Killed 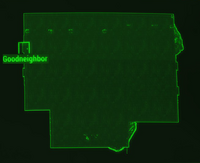