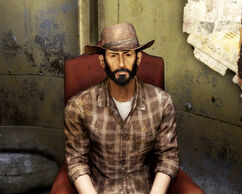 “Every day is a struggle, but every day I work to make myself and Foundation a better place to live.”

Ward is a member of the Settlers residing in Foundation in 2103.

A reformed raider who joined Foundation after abandoning his ways, Ward initially hid his past from the settlers, ashamed and afraid of being ostracized. His life changed when he discovered an old self-help manual, Be Better Than Your Worst Self by Bryce Jayhart. Although just one volume of 30 (at a pre-War price of $999 per copy), it changed his life for the better.[1]

He revealed his past to the rest of Foundation, risking exile or worse. Instead, they have forgiven him and allowed him to continue his reform. Since then, he has continued practicing the steps outlined by Jayhart, taking a daily inventory of ways he improved over his "yesterday self" and being ever mindful of the ability to improve. He even had "I'm better than this" tattooed in an unobtrusive place.[1]

Although he formally answers to Paige, Ward is in charge of the day-to-day operations of Foundation.[2] He will give commands to people, who follow them without question because of Ward's selfless attitude. When the Vault 76 vault dwellers arrive at Foundation, Ward is looking for equipment that has gone missing and will ask for their help.

Ward appears only in Fallout 76, introduced in the Wastelanders update.

Retrieved from "https://fallout.fandom.com/wiki/Ward_(Wastelanders)?oldid=3466616"
Community content is available under CC-BY-SA unless otherwise noted.