War of the Commonwealth 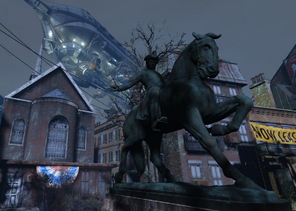 The Prydwen flying over the Paul Revere Monument

“Look around you, Danse. Look at the scorched earth and the bones that litter the wasteland. Millions... perhaps even billions, died because science outpaced man's restraint! They called it a "new frontier" and "pushing the envelope," completely disregarding the repercussions. Can't you see the same thing is happening again?”— Elder Maxson

After years of development, the Institute succeeded in the creation of generation 3 synths, robots completely identical to humans, in the late 2220s.[1] In the years to follow, the Institute began sending these synths out to infiltrate the Commonwealth, by either simply giving them false identities or "replacing" wastelanders with synth copies of themselves. The existence of these synths became known to the people of the Commonwealth in events such as the Broken Mask incident in 2229, where a synth began shooting people in Diamond City.

Due to the Institute's belief that synths are no more than tools,[2] an organization known as the Railroad was founded. Believing synths to be sentient, the Railroad started finding and hiding away synths. The Institute, seeing the Railroad as an annoyance, launched attacks whenever possible, such as the Railroad Safehouse Raids. In 2287, a Brotherhood of Steel recon squad detected high energy readings coming from the Institute, leaving Elder Maxson no choice but to personally investigate and bring in the Prydwen, setting up camp at the ruins of the Boston Airport and began to consolidate his forces. Considering synths to be abominations and a clear attempt to tamper with humanity, the Brotherhood begins investigating the Institute in preparation to destroy them.

While the tensions build, the Minutemen can build and potentially become a major player in the war. With no faction openly hostile to them, the Brotherhood, Institute and the Railroad begrudgingly allow them to grow in power and strength, and lead a peaceful, but tense, coexistence.

The arrival of the Prydwen led to increased hostilities throughout the Commonwealth, including the Brotherhood investigating the C.I.T. ruins and encounters with synths. The Institute also began stepping up efforts to combat the Railroad, such as taking out a route used for smuggling synths out of the region. The Railroad both continued to fight off the Institute while planning on how to deal with the Brotherhood of Steel's arrival.

At one point, the pre-War individual known as the Sole Survivor, who had been frozen in a cryopod for over two hundred and ten years, became involved in the conflict. Some time during their Vault's cryogenic stasis, Kellogg and two Institute members broke into Vault 111, killed the Sole Survivor's spouse and kidnapped their son, Shaun. Searching for Shaun, they eventually confront and, after learning that Shaun is being held by the Institute, kill Kellogg. While searching for a way to gain access to the Institute, the Sole Survivor begins interacting with the other factions, including possibly joining the Brotherhood of Steel, becoming an agent of the Railroad, rebuilding the Commonwealth Minutemen with Preston Garvey, or possibly some combination of the three.

Both the Brotherhood and the Institute require a large amount of energy to either power Liberty Prime or provide a permanent power source for their underground laboratory. Whoever the Sole Survivor decides to help, they head to the Mass Fusion Building and helps either Proctor Ingram or Allie Filmore secure the huge nuclear reactor, battling opposing forces along the way. After securing the reactor, they are prepared to finally take the fight to the enemy.

If they sided with the Brotherhood, they will wipe out the Railroad and use the newly repaired Liberty Prime to blast a hole in the ruins of the C.I.T. ruins and destroy the Institute from within using their decaying nuclear reactor.

If they sided with the Institute they will wipe out the Railroad and then launch an attack on Boston airport, where they will hack Liberty Prime to recognize the Prydwen as a "Communist" vessel and destroy it.

Finally, if the Sole Survivor angers the Institute, they can have the Minutemen wage war against them. While this will result in the Institute attacking the Castle, their members will be able to sneak into the Institute and destroy it from within using their nuclear reactor.

Whomever the Sole Survivor decides to side with, their presence will become the dominant force in the Commonwealth. The forces of the victorious faction can be found patrolling throughout the Commonwealth. Diamond City will also be controlled by the given faction, with their respective flags being displayed over the city. For example, siding with the Brotherhood will occupy Diamond City by placing a Knight browsing the stores and a Senior Scribe in front of the noodle shop. Conversely, siding with the Institute will place two Generation 1 synths in Diamond City, idly using work benches and browsing shops. Additionally, checkpoints will be established across the Commonwealth, which the Sole Survivor has the option of assisting in its defense.

Retrieved from "https://fallout.fandom.com/wiki/War_of_the_Commonwealth?oldid=3358275"
Community content is available under CC-BY-SA unless otherwise noted.