One Wasteland For All weapon 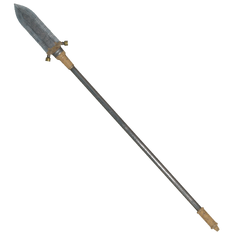 Cannot be traded or sold

The war glaive is a weapon introduced in the Fallout 76 update One Wasteland For All.

The war glaive consists of a long, dark metallic shaft with light brown accents. By default, it is topped with a broad, double-sided sword-like blade. The edges of the blade are serrated, the central ridge is flattened, and two capacitor-like objects protrude from the base of the blade.

The war glaive can be equipped with multiple elemental heads, with each having a unique appearance. The shocking head consists of dual concave crescent blades attached to a central wave-bladed spike, with electrical arcs between the blade tips. The flaming head has a thick curved blade with a rear spike and a fuel tank to create flames along the blade. The cryo head has a wide, semi-circular, spade-like blade covered in frost. The plasma head consists of a large, thick contraption and metallic enclosure that creates a single-sided beam of plasma acting as the blade.

Similar in damage to the super sledge, the war glaive is a heavy-hitting two-handed weapon, though bladed instead of blunt. War glaives cannot be traded, dropped, or sold to vendors, and neither can the plans for the war glaive and its mods. Legendary war glaives can be scrapped at a legendary exchange machine.

Retrieved from "https://fallout.fandom.com/wiki/War_glaive?oldid=3410876"
Community content is available under CC-BY-SA unless otherwise noted.