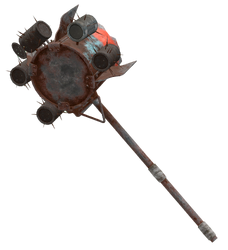 War drums are melee weapons that can be found and crafted in Fallout 76.

Consisting of a metal barrel, which is mounted on a metal pole with spiked tin cans attached to the rim, these weapons cannot be modified, and have limited condition longevity with a high weight value.

A pun on real-world war drums, these weapons make a distinctive sound upon striking enemies.

Add a photo to this gallery
Retrieved from "https://fallout.fandom.com/wiki/War_drum?oldid=3452965"
Community content is available under CC-BY-SA unless otherwise noted.