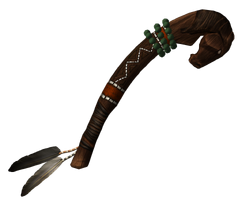 War club honors is a weapon mod for the war club in the Fallout: New Vegas add-on Honest Hearts.

This mod increases the swing rate for the war club by 25%, thereby increasing strikes per second from 3 to 3.75. Visually, it decorates the war club with three necklaces of green beads, a fresh paint, and new carvings.

Joshua Graham can be traded with while in Zion Canyon, and through him purchase this weapon mod, as well as all other Honest Hearts weapon mods, from the Gun Runners upon completion of the add-on and returning to the Mojave Wasteland.

Retrieved from "https://fallout.fandom.com/wiki/War_club_honors?oldid=3455026"
Community content is available under CC-BY-SA unless otherwise noted.